Skip to content
In an attempt to delay the spread of COVID-19, South Africa entered its first "lockdown" on 26 March 2020. This curtailed economic activity leading to an immediate reduction in economic activity, job losses, business closures, wage cuts and declining household income.
The economic impact become apparent as local and national government sought loans to offset the anticipated decline in revenue. The impact on the national fiscus was evident as government reigned in spending, diverted allocations, limited wage increases, etc.  However, the impact of the lockdown on local government finances was more muted. Statistics released by StatsSA and National Treasury reveals that metropolitan municipalities have only marginally been affected by the pandemic.
Although there was a decline in metropolitan municipality's revenue receipts immediately after the lockdown started this reduction was brief. Moreover, the decline was in tune with the normal rhythm on municipal revenue cycles. National Treasury data shows that in the financial quarter ending 30th September 2020, metropolitan revenue reached R63-billion. This was 1% less than revenue receipts total for the same quarter in 2019. Year-on-year comparisons show a slight increase in metropolitan revenue between the financial 2018/19 and 2019/2020 years. The last quarter of the 2019/2020 financial year coincided with the deepest level of lockdown.
Figure 1 below shows how the main categories of metropolitan revenue changed in over the last ten quarters. The sharp increase in metro revenue in the quarter following the lockdown is largely attributable to increases in "other income" - i.e. revenue from sources other than rates, grants and service charges. However, the rise in this quarter is in keeping with the trend in preceding years where "other income" rises sharply in the quarter starting July (the first quarter of the new financial year).
Figure1: Metropolitan municipal revenue receipts 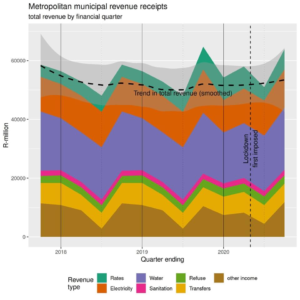 The maintenance of revenue levels is attributable to municipality's ability to ensure payment for rates and services despite the economic hardship. This was achieved via vigorous debt control. In Johannesburg for example, the lockdown was followed by a widespread programme of cutting electricity to households who's accounts were in arrears. To be reconnected, households had to admit liability for the debt, enter a repayment schedule with the municipality and pay for a reconnection.  The impact of this was to maintain payment levels despite the lockdown.
Ultimately metropolitan municipalities have been able to ensure that customers absorbed the full financial impact of the lockdown - irrespective of households reduced ability to pay. In recent years, metropolitan municipalities have consistently ensured that rates payers and those who pay for services bear an ever larger proportion of operational costs. Over the last two decades, municipal charges and taxes have consistently risen faster than the inflation rate. Initially this strategy was positive for municipal coffers.
In one financial year alone (between 2009/10 and 2010/11) metropolitan revenue from rates and service charges rose by over 20%. Subsequent increases yielded more revenue - but with ever declining returns. Metropolitan municipalities are now in a situation where further increases in rates and service charges are likely to result in declining total revenue. Further increases may ensure that the additional revenue from the higher charges are offset by consumers reducing their consumption or reverting to substitute services (eg. by harvesting rainwater, increasing the use of gas and making better use of solar energy).
Figure 2: Annual trend in metropolitan revenue 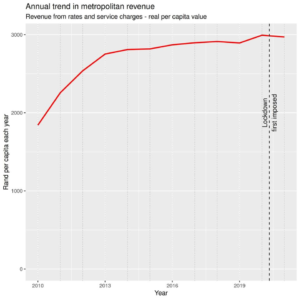 Metro revenues on a downward trend

Once inflation has been taken into consideration metropolitan revenue appears to be on a downward trend and although the current situation coincides with the COVID-19 lockdowns, it is merely a continuation of the trend established earlier. In the past, declines in metropolitan revenue have been attributed to economic conditions.  The last time metropolitan revenue declined was during the financial crisis of 2018. However, the changing trajectory in revenue indicates that the stagnation is not despite the increasing service charges but because of them.
When coupled to population increases, it is apparent that municipalities have less revenue with which to service the needs of each resident. If in the coming financial year, municipalities once again increase rates and service charges above the inflation rate, the impact may well be to further reduce municipal revenue from those sources.
Unless there is a marked turnaround in economic situation, the ability of metropolitan municipalities to increase revenue and service growing populations have hit a ceiling. Faced with this, municipalities will have to curtail services or, preferably, increase their own productivity and, like households, make do with less.