There is spatial clustering of crime in South Africa, as has been shown to be the case internationally, whether in high crime areas or in impoverished communities, such as Khayelitsha in the Western Cape or the City of Tshwane. Confirming that the Law of Crime Concentration is equally applicable in the South African context as it is in countries like the Netherlands, Israel, Brazil, Japan and the USA. In many of these developed or industrial countries there has been a ‘crime drop’ and in South Africa this may occur in localized areas but this is generally not the situation for the entire country. Poverty and deprivation remain the key causes of high levels of crime in South Africa. The research conducted by Greg Breetzke and colleagues has shows that crime is not insidious, which is the common belief that is possibly born from how it is covered in the media, but rather spatially clustered in certain locations.

In 2019/20 there were over 1.69 million crimes committed in South Africa according to the Institute for Security Studies (ISS). Research conducted by Statistics South Africa as part of the Victims of Crime Survey, shows that this equates to only 40% of reported crimes. When comparing the extent of media coverage of the COVID-19 pandemic to the crime epidemic that South Africa has faced for decades, far greater exposure has been given to the disease than the crime situation. Access to information, research and media coverage is key to continue the conversation on how to bring about a reduction of the high levels of crime in South Africa.

South Africa was one of the first countries to do spatial analysis of crime at an individual and police station level. Several geospatial techniques have been used in this research including geographic profiling, use of geospatial statistics and a range of other techniques, such as ecological analysis of crime and socio-cultural factors. The research allowed the socio-economic causes of crime to be identified, but this research is not well recognized internationally. Nevertheless, it has provided a useful knowledge base to continue to tackle the crime situation in the country.

A significant amount of research and geospatial analysis has been done on key crime types to look at the ubiquity and concentration of crime. The Pareto principle or 80/20 rule as encapsulated in the Law of Crime Concentration was used as the basis to conduct the research. An analysis of the crime data was done over an 8-year period between 2008-2015 in the greater Khayelitsha area of Cape Town.

Khayelitsha was established in 1983 and is approximately 60 kilometers from the CBD of Cape Town. It is recognized as the fifth biggest slum in the world and more recent estimates of its population is approximately 1.2 mil people. Although it is relatively homogeneous area with 75% of the population living below the upper poverty line, there are large mushrooming informal areas.  The focus of the research was more specifically in Khayelitsha, Lingelethu West & Harare police stations.

The high density of formal and informal township dwellings makes the area very difficult to police. With limited roads existing within especially the informal areas, the police are unwilling to enter because of a fear of being attacked. This also means that the capturing of accurate geospatial information on crime is extremely difficult and although the South African Police Service (SAPS) have limited access to handheld GPS equipment, they are not often used. 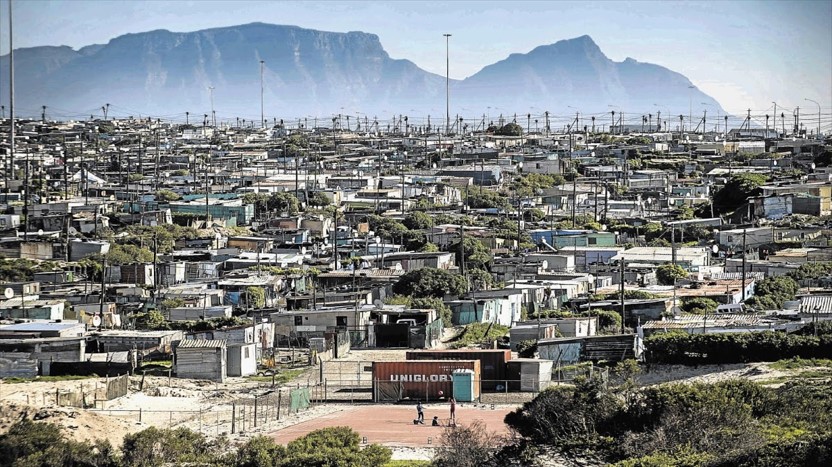 Focusing on the crimes of rape, common assault, and common robbery, the research showed that 20% of the areas within the three police stations accounted for 75% of the crime. What the research also showed is that over a period of years the number of neighborhoods with high levels of crime tended to decrease and move from one neighborhood to another. It is postulated that this reduction in the number of areas with high levels of crime can be attributed to hot spot or tactical policing, which results in the displacement of crime from one neighborhood to another. These trends are also found internationally and affirms that the Law of Crime Concentration is equally applicable to South Africa.

Khayelitsha remains in the top 20 police stations for crime and over the eight years of the research, its crime levels have remained high. The high levels of crime resulted in the establishment of the Khayelitsha Commission in 2012. One of the recommendations was that another police station should be established in greater Khayelitsha but none of the recommendations have been implemented, as far as it is known. Since 2012 there has been an increase in crimes in Khayelitsha, Lingelethu West & Harare police stations. Similar research was conducted in the City of Tshwane focusing on all crime types. The results of the research showed that at a metropolitan level there was a spatial concentration of crime that occurred in 20% of the geographic area or the top five neighborhoods.

Using web mapping technology, the distribution of rape, common assault and common robbery can be shown at a police station level nationally, provincially or within districts of South Africa. Rape is concentrated in the metropolitan police stations and within the former Transkei region of the Eastern Cape (see image below). Common assault occurs in urban areas especially within the provinces of Gauteng and Western Cape. An examination of the distribution of common robbery at a police station level shows that this crime tends to be concentrated more in the northern parts of South Africa. To access the SA Crime Profile Viewer click here.

The value of web mapping technology is that it gives people access to crime statistics so they can get an understanding of the distribution and level of crime at a police station level. Access to crime information is a right of citizens, so that they can engage with the Community Police Forums (CPF) to bring about a reduction in levels of crime. Without this sharing of information communities will remain disenfranchised and not see the need to assist the South African Police Service (SAPS) with intelligence or helping with crime reduction. The technology also allows crime patterns of specific police stations to be examined, such as Khayelitsha, Lingulethu West and Harare. 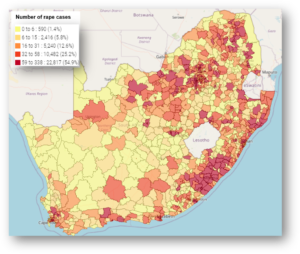 An examination of the 2018/19 and 2019/20 crime statistic in the table below shows that levels of common assault and common robbery are quite similar in the three police stations while levels of rape is slightly less in Lingulethu West. Changes in the number of recorded common assault, common robbery and rape cases shows the significant increase that was experienced in Khayelitsha between 2018/19 and 2019/20. In the City of Tshwane, rape and common assault are concentrated in the western parts from Atteridgeville in the South to Soshanguve in the north. In contrast, common assault has a much larger distribution across the city.

Research on the temporal nature of crime shows that it occurs at different times of the day and on distinct days of the week. Murder tends to occur in the late evening and over weekends, while common robbery happens mainly in the early morning or evening on weekdays. This emphasizes the need for different strategies to control the extent of different types of crimes in their policing. The causes of these crimes are multidimensional and multi factorial which are exacerbated by the design of South African cities with townships being disconnected from economic centers and places of employment.

These design effects of have yet to be resolved. Consequently, the impoverished and high crime characteristics of townships have entered into the psyche of South African citizens. As a result, apartheid planning has contributed significantly towards crime, resulting in black communities being more affected, with crime now beginning to intensify in townships and impact on the impoverished of the country. It is not only the black townships that are experiencing high levels of crime. For example Mitchell's Plain, a predominantly coloured community in the City of Cape Town has the highest numbers of common assault and common robbery. Phoenix in eThekweni is predominantly an Indian area that the highest number of common assaults. 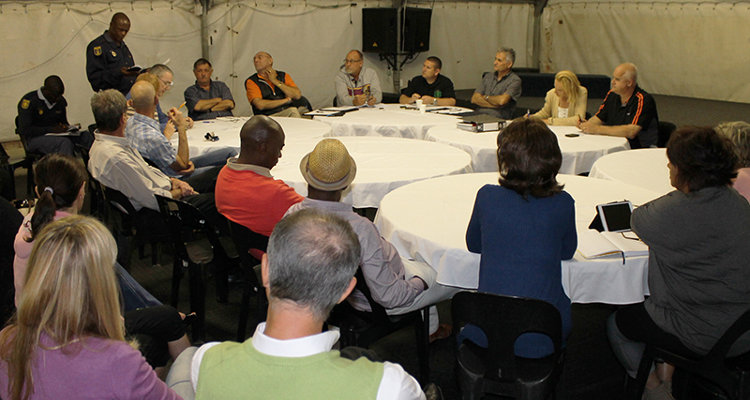 In the conducting of crime research there are significant limitations, such as the underreporting of crime, which is a consequence of people not seeing it as being essential as well as their distrust of the SAPS. A further limitation is the poor quality of crime data, especially in informal areas, requiring significant amounts of cleaning for it to be used in research.  Accordingly, there is a strategic need to focus on the collection and provision of accurate crime data. There is also the need for policing to be done in a more strategic fashion rather than the using a “luck and chance” approach. More spatial research and analysis of crime is needed to contribute to reducing the levels, increase conversations on what needs to be done and adding to the international literature.

A key challenge that South Africa faces is the lack of skills and competency of the South African Police Service (SAPS) in preventing crime and successfully investigating those committed so that offenders can be brought to trial and sent to prison. To be able to conduct the required research the SAPS needs to be more responsive in the provision of data and engaging with the research community. There is also a need for a coherent spatial information system on crime that can be used to conduct research and spatial analysis of crime, such as in the Spatial Crime Research Center being considered at the University of Pretoria. Possibly the greatest need is to have an informed public that is aware of the magnitude and distribution of crimes. There is no doubt that there is a need for greater support to conduct this type of research, including economic support to increase the pace and maximize the reduction of crime in South Africa.