SAARF’s Living Standard Measures (LSM) has been around for more than a decade now. Over the years, this segmentation tool has been used extensively by planners to do demand forecasting, develop marketing strategies and media campaigns. But there is a way to glean even more valuable information from this tool, and that is through mapping.

As most people in industry will know, the LSM segments the consumer market into ten groups primarily by looking at what household assets people have access to. The use of household assets as a measure of the relative wealth of households has been widely promulgated by agencies such as the World Bank. In South Africa, a comparison of areas dominated by lower LSMs and poverty rates has shown that there is indeed a strong association between household assets and wealth.

In the past, the LSM information existed only in the form of databases that made it difficult to integrate with other layers of information. For a number of years, however, AfricaScope has used small area estimation techniques to create estimates of the number of households falling into the ten LSM groups at a local community level. The LSM data is sourced from Statistics South Africa's General Household Survey (GHS) that has provided access to this data for many years. This enables the LSMs to be understood in terms of their distribution across the country and longitudinally over many years. 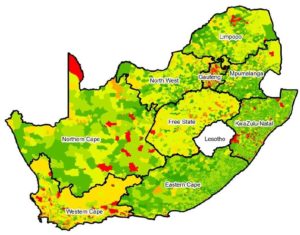 Take the adjacent map for example. It shows which of the 10 LSM groups dominated at a local community level in 2018. What can immediately be seen is how different the provinces are from one another. For example, you can see how the lower LSMs (LSM 1-3) dominate especially within the rural areas of the Eastern Cape and KwaZulu-Natal (dark green). In the provinces of Mpumalanga, Limpopo, North West and the Northern Cape, there are more areas covered by the middle LSM groups - LSM 4 and 5 (light green).

What is interesting to note is how different the rural areas of the Free State and Western Cape are from the other provinces. The map shows that the commercial farming areas of the Free State are largely dominated by LSM 5 (light yellow), while in the rural areas of the Western Cape there is a predominance of LSM 6 communities (yellow). Gauteng of course, stands out from the other eight provinces because it is mainly urban and dominated by LSM 8-10 (orange & red colours). These differences in the dominance of various LSM groups at a local community level can largely be attributed to the distinct differences in settlement types, the environment, land use, linguistic and cultural characteristics, extent of urbanisation and population density, variations in wealth brought about by different economic activities and of cause, the policies of Apartheid that restricted where people resided.

Within the urban areas, the distinct differences in LSM dominance between the township areas and the suburban residential communities are immediately evident. In general, the township areas are dominated by LSM 6 households (yellow). This is not to say that there are no wealthy households in townships but they tend to be outnumbered by the large number of poorer households. Similarly, the map shows is that even in the rural areas, you can still find LSM 10 dominated areas because these areas have more wealthy land owners compared to the poorer farm labours living in particularly sparsely populated communities.

Another advantage of mapping LSMs at a local level is that it enables you to do a comparison of the LSM dominance at a local level in Gauteng between 2004 and 2009 (see map below). It shows a continuum from those areas that are declining to those that are improving. In general, the historically disadvantaged township areas are improving while scattered within the high LSM areas are communities that are declining. These changes can be attributed to policy changes, which saw historically disadvantaged communities benefiting from social welfare, black economic empowerment and infrastructure investments. In 2018 the GHS data showed a re-emergence of LSM 1 and 2 in deep rural areas that showed that with urbanization these communities remain behind because they have been caught in a poverty trap. 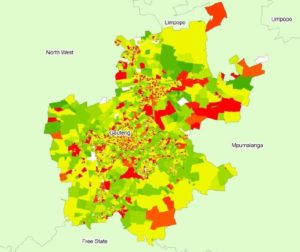 Conversely, areas that are declining are probably doing so as a consequence of the economic downturn in recent years, or due to the densification of the area with the development of townhouse complexes. Areas also degrade with changes in financial flows to poorer communities and with land-use changes from residential to commercial. What this emphasizes is that the mapping of LSMs at a local level is invaluable in showing how local communities are changing, and consequently, how consumer patterns are changing.

For government, this knowledge means an ability to implement appropriate development strategies. For the private sector, this information can be used to make more informed decisions about the location of outlets, enabling businesses to target their customers with suitable products, and better review their marketing and media strategies. There is no doubt that as a household asset index, the LSM continues to provide an important view of the consumer market in South Africa and how it is changing.