The sun is rising on the “dark continent”

Historically, Africa was been known as the “dark continent”. The reason for this was that extraordinarily little was known about this large continent for many centuries, especially in the western world. In other words, very little information was available on Africa and especially mapped information. In the 5th and 6th centuries BC, only the coast of North Africa had been mapped. It was not until the 15th century AD that better cartographic maps were produced but these showed the lack of information on the central and southern interior of the continent. Even in the 19th century AD, little was known about the geography of the sub-Saharan Africa.

What the world did know about Africa was the slave trade. Large numbers of people from Africa were taken as part of the slave trade to other parts of the world and this had a significant impact on the continent. It was also impacted by the colonialization of Africa as part of the scramble for the continent by European powers. Africa has faced many challenges in its past and even today, including high levels of poverty, food insecurity, military conflict, unemployment, diseases like malaria, TB & HIV/AIDS.

This has often been exacerbated by the poor provision of education and health facilities in many African countries. There is no doubt that the use of geospatial information can be used to tackle many of these challenges. It is only through the use of geospatial information that targeted interventions can be identified and appropriate mechanisms of accountability implemented to bring about sustainable development in the immediate future on the continent.

Nevertheless, there are many opportunities that Africa provides that can best be developed through the provision of information, especially geospatial information, and the insights that it provides at a national and sub-national level. Many people are unaware that Africa is the second largest continent in the world in terms of geographic area and has the second largest population. To give a perspective of the size of Africa, one can fit the geographic area of five of the largest economies of the world into the land mass of the continent, including the USA, China, Western Europe, Argentina and India.

There is unparalleled opportunity to invest in African, especially as other regions of the world begin to stagnate from an economic and a socio-demographic perspective. For example, the continent has 40% of the world's natural resources and many of the critical minerals required for the development of the world. Africa could become a significant food provider to the world if much of its arable land could be cultivated. Geospatial information is critical if these resources are to be identify in African countries, so that informed decisions can be made about Foreign Direct Investment (FDI) in them. Once a decision has been made about which country to invest in, geospatial information again becomes invaluable in informing decisions as to where specifically the investments should occur at a sub-national level. 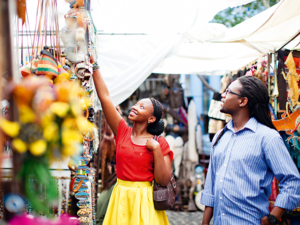 The continent has shown strong economic growth over the last decade but with declines in oil and commodity prices, will need to diversify its economies. With future growth of the continent to approximately 1.9 billion people by 2050 at a rate of 2% per annum, could potentially provide much needed human resources. With 70% of the population being under 25 years of age it has the largest youth population, and the middle income will grow to 42% of the population by 2060. Making Africa a significant resource for economic growth globally and on the continent itself.

Craig Schwabe in his webinar on “how to grow your market in Africa through data driven insights”, provides a framework that characterizes some of the historical perspectives of Africa and points to the unparalleled opportunities that exist on the continent that may enable Africa to rise to its full potential.

Craig Schwabe is a geospatial specialist and focuses on the development of geospatial information for South Africa and Africa. He has assisted the United National Economic Commission for Africa (UNECA) in defining the fundamental geospatial datasets for Africa as well as developed key geospatial datasets for South Africa and Africa. As part of the AfricaScope team he has developed demographic and income data for South Africa and countries across Africa. More recently he has been involved in the development of the African Investment Potential Atlas that provides a multitude of variables in a geospatial format that can be used in making informed decisions about investing in African countries. He has been an adviser to multilateral and multinational organizations in the development and use of geospatial data in Africa. He has assisted the South African government in publishing a guideline for improving geographic access to government service points. He specializes in the use of geospatial information to optimize the provision with retail networks within countries. Craig has published several reports, books, chapters and scientific papers as well as presented papers at several national and international conferences.