South Africa is ranked as one of the top crime countries of the world and especially in relation to violent crimes. The Minister of Police over the last two years, has constantly called for community participation and the involvement of crime analysts and researchers to assist the SAPS. Even so, there is resistance on the side of the SAPS to supply information on the what, where, when, why, and who have crimes.

Effective crime prevention and its resultant reduction, is not possible without knowing:

Politicians, academics, research institutions and police officials have repeatedly said that “effective crime prevention and resultant crime reduction is only possible with the full involvement of the community”. As communities do not have crime information at hand that will allow them to be informed and to make a contribution, they remain dis-empowered to really participate in crime prevention in South Africa.

The government is even reluctant to provide this information to Community Police Forums (CPF) and security companies, who are supposed to be their community partners. Without information, how are CPFs and the communities that they represent, supposed to hold the SAPS accountable, improve policing services, educate people on the crime situation in their areas, develop joint crime prevention initiatives and root out criminals elements in communities?

This information is needed for effective crime prevention and reduction in South Africa. Crime statistics are kept by the South African Police Service (SAPS) and they are not willing to release detailed information to external parties.

What information is available to the public to enable them to help in the reduction of crime in South Africa is the annual release of statistics by crime category and police precinct. Some of the sub-categories of crime are combined, such as aggravated robbery, which is extremally problematic for the analysis of crime and in developing appropriate interventions. It is especially problematic when it comes to crimes like murder and rape.

The release of aggregate statistics at a precinct level for a period of one year, 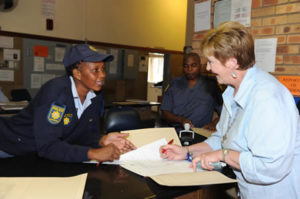 does not allow for detail spatial analysis within a precinct, which make the answering of the where, when, why and who questions for a specific station largely impossible. At most, the annual crime statistics per police station provide a strategic overview of crime for a period that occurred between 6 to 18 months ago.

Other information available to the public includes a briefing document that forms the basis of the presentation to the Crime Registrar during the release of crime statistics, which usually occurs in September of each year. This document provides a little more detail, including the top 20 stations per crime type and crimes against women and children. There is also the Addendum to the SAPS Annual Crime Report, which is a detailed document that is put together by the research staff of the Crime Registrar. This document provides a docket and Business Intelligence analysis, to explain most categories of crime. Unfortunately, they are struggling with inter alia bad quality dockets and access to aggregated crime categories, without it being peer reviewed.

A dim light in a very dark crime tunnel was when the Minister of Police Bheki Cele on the 8 May 2020 told MP’s that the quarterly release of crime statistics, which was approved by Cabinet in June 2016, will happen in the near future. This provides some hope that the annual strategic picture of crime will be replaced by four quarterly sets of crime statistics and the data will in all probability be out of date by only a few months. It is unlikely that the SAPS will release all three levels of policing crime statistics mentioned above in the envisage quarterly reports.

Given that analyst outside the SAPS only have access to aggregated and outdated crime data, they have to use all the tools and skills available to them to make some sense of the crime statistics and to answer some of the what, where, when, why and who questions related to crime in South Africa.

AfricaScope has released a web mapping application of crime numbers per crime type and police precinct for 2018/19 that helps me to do more detailed crime analysis. With a click of a mouse button I am able to use the SA Crime Profiles to:

I am so impressed with AfricaScope’s SA Crime Profile web mapping portal because it has enhanced my crime analysis capability to the extent that I am presently revamping an article on public/street robbery. This functionality is not found on the SAPS crime statistics website or for that matter on any website that I know of. I will also use it to revamp an article on murder, which is made possible through the use of AfricaScope’s crime mapping portal.

This crime mapping site is available to all South Africans free of charge and can help citizens and CPFs access information on crime as well as allow students, researchers and academics to do more detailed crime analysis. It will help police agencies, criminal justice officials, security companies, the insurance industry and anybody else who is affected by crime, to get a more thorough understanding of the spatial distribution and characteristics of crime in our country.

A commercial version of the SA Crime Profile web mapping portal, with more detailed information using various indicators, such as Location Quotients, is also available to companies and individuals who are in the crime prevention and risk management business (e.g. security & insurance). The Location Quotients is one of the most effective way of ranking police stations, as it shows whether a particular crime in a specific police station is above or below the national average. This commercial portal will be a first for South Africa.

One can just imagine the useful operational data that the SA Crime Profile web mapping portal would provide if the SAPS released crime incidence data on a quarterly or monthly basis. Crime analysts can only imagine what this would be like as an analytical tool but it is most likely to remain just a dream. However, post Covid-19 with the probability of high unemployment levels and the resultant high levels of crime, key stakeholders may need to convince the government for the need for frequent incident level data to empower CPFs and communities to ensure effective crime prevention and crime reduction.

Dr Chris de Kock is the former head of the Crime Information Analysis Centre (CIAC) of the South African Police Service (SAPS). He holds a PhD in Sociology and has extensive experience as a researcher and analyst in crime and violence in South Africa. He is also a consultant to companies and institutions who make use of his services. As an associate he works with AfricaScope in the analysis of crime statistics and in the developing of crime atlases. He also assisted with the survey on citizen perceptions of safety and security in high crime areas of Gauteng province.